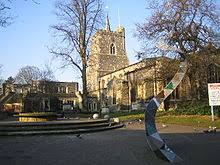 Based in Hertfordshire, Watford sits 17 miles northwest of central London, just inside the M25, developed on the river Colne, on land owned by St Albans Abbey. The growth of Watford started in the 12th century when a charter was granted for a market and the subsequent building of St Mary's Church. The town grew slowly from then until 1837 when the London - Birmingham railway allowed the town to grow more rapidly, with paper-making mills, such as John Dickinson and Co. at Croxley, influencing the development of printing in the town which continues today. Two brewers, Benskins and Sedgwicks, amalgamated and flourished in the town until their closure in the late 20th century. Hertfordshire County Council designates Watford to be a major sub-regional centre. Several head offices are based in Watford.

We get many students that want to stay in Watford. One of our main pick-up points is the Asda superstore in Watford so this makes hosting in this area convenient for everyone. If you would be interested in becoming a hosting family and hosting children for 3 or 4 days, then complete the enquiry form on the right and we will get back to you.